You are here: Home » News » Industry Encyclopedia » What is Lightning Arrester？

What is Lightning Arrester？

Lightning protection means to avoid the harm to human body and buildings caused by thunder and lightning through certain methods and measures. Lightning is a natural discharge phenomenon. Lightning strike is a natural disaster, which not only causes damage to equipment and housing facilities, but also may cause fire, explosion, and even injuries of people and livestock. There is a variety of lighting protection devices, such as lightning rod, lightning conductor, lightning net, lightning belt and lightning arrester. They make lightning into the earth by earthing electrodes. Therefore, to have a better understanding of these devices, I want to share some knowledge about them and the lighting arrester is what we will tell in the following, hoping you can learn something from that. Structural Design of The Lighting Arrester

The concealed lightning arrester is to use the top roof as a flashing device. According to the structure of general buildings, the steel bar is only 6-7 cm away from the surface layer. The thinner the surface layer is, the smaller the hole of lightning strike point is. However, some buildings have thicker waterproof and insulation layers, and the thickness of the incoming steel bar is more than 20 cm from the surface layer. It is better to install an auxiliary lightning protection net. Auxiliary lightning arrester can be generally made of galvanized round steel with diameter of 6 mm or more. According to the importance of buildings, the grid size can be made of 5 m'5 m or 10 m'10 m round steel respectively. The lightning arrester can be divided into clear network and dark network. Additionally, the denser the grid is, the better its reliability is. 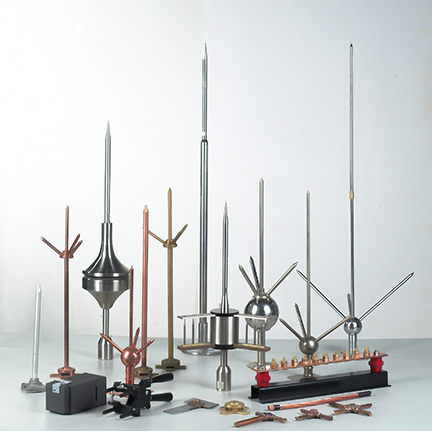 Installation of The Lighting Arrester

1. When the lightning belt and its connecting line pass through the settlement ditch, there should be a spanning line with more than 10-20 cm expansion margin.

3. When the slope of the tile roof building is 27°-35° and the length is not more than 75m, you should only lay the lightning belts along the roof. For houses with four slopes, lightning belts should be installed on the ridges of each slope.